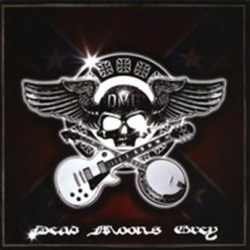 Thanks for coming to the site. Here we hope you'll find everything your needing to know about DMG.

Whats Up?
The song lyrics on the album and on the independant releases were eulogies for dead family members, Bible stories, life changing events or life lessons, moral lessons have you, just life in general. "Even the songs that would be considered secular by church standards reflected Christ like behavior. Mother Truth is about  relaxing at home after being on the road." True Colors is seeing through the fake front others put up and then being called the bad guy for calling it.

Most songs may seem bleak or about questionable subject matter but upon reading further (make the effort) you'll see that the last verse or the chorus brings the message home. An example of this would be the song One Eyed God. "Folks used to freak out at the title and the chours but the song is about people who worship thier TV, believing everything it says, spending hours in front of it, etc..i guess today it should be about compters or Facebook huh?"  Visions being about the damage that false divination practices will bring. Savior on the other hand is Bz personal testimony and a revelation for a friend on what it takes sometimes for God to get our attention.
So the lyrics to make you think and question are still present today.


Points about DMG
1. DMG started as the colaborative efforts of Marc and Dave in 2004  Although there has been line up changes in the past it was due to He and David Peters finding available musicians to make performances due to schedule conflicts.

For further info on unWanted Outreach or Sixer Six links are under the Contact
page.